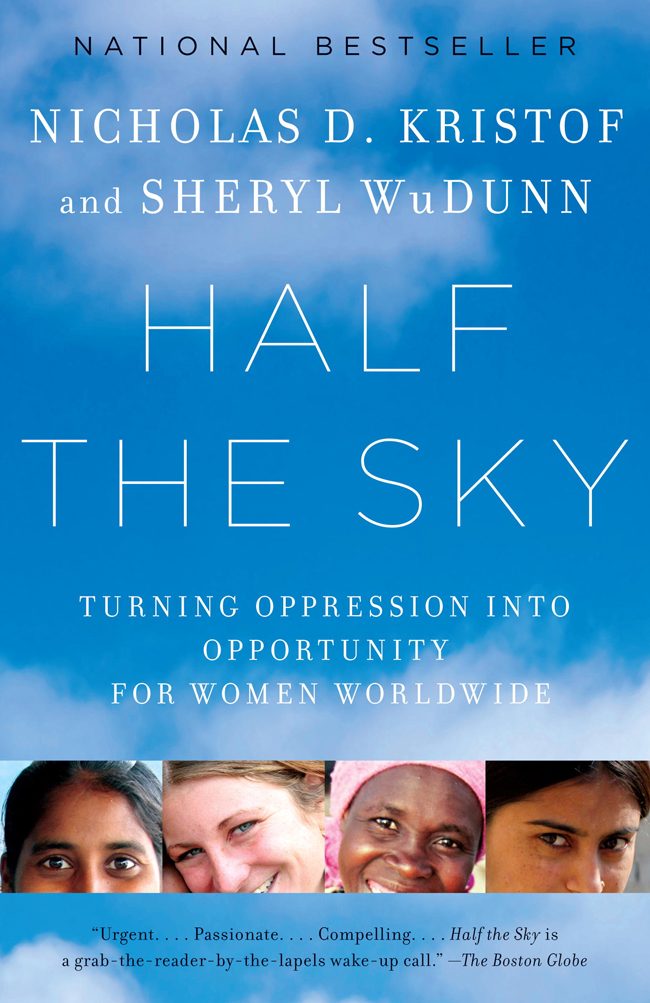 If I wasn’t running a letterpress invitation company, I would love to be Nicholas Kristof. He’s an editorial writer for the NY Times who is a wonderful example of using one’s life – and job – to bring about concrete change in the world. One of his focuses has been bringing attention to women’s plights around the world – childhood prostitution, for instance, or the crazy high mortality rates for women in childbirth, or the lack of education of girls. He writes, “In the 19th Century, the paramount moral challenge was slavery. In the 20th century, it was totalitarianism. In this century, it is the brutality inflicted on so many women and girls around the globe: sex trafficking, acid attacks, bride burnings and mass rape. Yet if the injustices that women in poor countries suffer are of paramount importance, in an economic and geopolitical sense the opportunity they represent is even greater. ‘Women hold up half the sky,’ in the words of a Chinese saying, yet that’s mostly an aspiration: in a large slice of the world, girls are uneducated and women marginalized, and it’s not an accident that those same countries are disproportionately mired in poverty and riven by fundamentalism and chaos.” What a guy. How can we, as women, not care about this?

His latest column in last Sunday’s paper deals with those suffering from obstetric fistulas – 3 to 4 million women in Asia and Africa, often injured in childbirth while teenagers because they gave birth before their pelvises were fully grown. After giving birth, a young woman with obstetric fistulas is “incontinent,” Kristof writes, “steadily trickling urine and sometimes feces through her vagina.” These young women are then usually abandoned by their husbands – “scorned, bewildered, humiliated and desolate, often feeling cursed by God.” And to repair their bodies and their lives? A $300 surgery that takes 20 minutes. Wow.

I’m coming at this three months after an amazing birth of my second child, a birth complete with a doula and a midwife at a local birthing center. It makes me think if I wasn’t running an invitation company, I would love to go back to medical school, learn stuff, and then help women in this way. But – I don’t have a medical degree, can’t do medical school right now, so what I can do is this. We’re running a free invitation envelope printing promotion through Smock. Buy a letterpress invitation set, get free envelope printing on your outer envelopes through December 31, 2009. This saves you about $300 for a quantity of 100 invitations. Sure, you can pocket the money, or use it to buy some nice organic sheets, or shoes, or books, or – you can donate the savings to the Worldwide Fistula Fund (or pick another cause that you care about) and really make a difference in someone’s life. Even if you’re not shopping for invitations – make a difference, forgo that Starbucks coffee for a while, and then make a donation. Read more about what you can do to help those suffering from fistula on Nicholas Kristof’s blog.